As part of the process of winding-up a company, an examiner from the Official Receiver‘s office can request an interview with anyone who had a relationship with the company in the 3 years prior to its demise.

When a company becomes the subject of a Compulsory Winding Up Order, an order is drawn up for the court to makes a ruling that will effectively end the company’s existence.

The order is sent to the government’s Insolvency Service where it is administered and forwarded to a civil servant and officer of the court, the Official Receiver.

All new orders for Bankruptcies and companies that are to be wound up are sent the Official Receiver who carries out the court’s orders.

The Official Receiver may act as an interim liquidator if there’s money in the company’s bank account(s) but no assets to be realised.

In this capacity, they will ask for the cash to be transferred into the liquidation estate, and use the information provided by the director to produce a Statement of Affairs, which is shared with creditors to explain why the company was wound up.

However, if the company has physical assets and there are investigations to be conducted, the Official Receiver will randomly select a local insolvency practitioner to liquidate the company on behalf of the Secretary of State for Business, Energy and Industrial Strategy.Official Receiver ExaminationExpand

As part of the winding-up process, the Insolvency Service usually summon the company director to be interviewed about their business affairs and conduct.

An examiner from the Official Receiver’s office can also request an interview with anyone who had a relationship with the company in the 3 years prior to its demise.

They may request interviews with as many people as necessary to gain a comprehensive understanding of the insolvency.

Before the interview, the director will be asked to complete a questionnaire. In the document, they must provide information about the company’s:

The director should either bring the completed questionnaire to the interview or post it back to the Official Receiver beforehand.How should a director prepare?Expand

The best way for a director to approach their examination is to be open and honest, and explain all the steps they took to protect the interests of the company’s creditors, shareholders and employees, and HM Revenue and Customs (HMRC).

Most directors are ill-prepared for the examination. But I&L can mitigate any discomfort by guiding you through the process; preparing you for the interview; and helping to explain your actions.

The Official Receiver and examiner act solely in the interest of the company’s creditors, so they can’t provide you with advice that is in your best interest.

We can counsel you on the issues that require attention to limit any adverse consequences against you such as personal liability claims, Director Disqualification Proceedings, or worse.Allegations of misconduct Expand

The examiner looks for evidence of misconduct (also known as Misfeasance), and will try to determine whether the director abused creditors’ trust.

Examiners ask lots of questions and seek to identify areas where the director may have committed acts of Misfeasance. But if they believe mistakes were entrepreneurial rather than malicious, the director will not be severely reprimanded.Preferential PaymentsExpand

In the months leading up to and during insolvency, the company would’ve collected taxes from VAT, National Insurance, and PAYE. But did HMRC receiver any of this money?

In many instances, a competent insolvency practitioner will highlight how money that should’ve been sent to HMRC was used to:

Either way, both examples would reveal evidence of Preferential Treatment to creditors at the expense of HMRC, and that’s a Misfeasance.Directors’ Conduct D-ReportExpand

Depending on the type of liquidation, either the liquidator or Official Receiver will file to the Insolvency Service a confidential document outlining the director’s behaviour, a Directors’ Conduct D-Report.

To prevent liquidators and Official Receivers straying from the truth, the D-Report is prescriptive and asks questions such as:

The D-Report is submitted to the Secretary of State for Business, Energy and Industrial Strategy. Company director disqualification proceedings may follow if its contents raises any serious questions about the director’s conduct, especially if they owe significant debts to HMRC.Lost accounts, books and recordsExpand

It’s surprising how many directors turn up for interviews claiming to have ‘lost’ the company’s accounts, books and records.

This is a pretty senseless idea because according to Section 386 of the Companies Act 2006 a director must maintain company accounting records for up to 6 years. Moreover, failure to deliver them upon request is an offense.LiquidationsExpand

In a Creditors’ Voluntary Liquidation (CVL), the liquidator examines the director, just as the Official Receiver would; but the examination is less formal. Interviews with the liquidator, for example, are sometimes conducted via telephone.

The role of the liquidator is contradictory because although liquidators are supposed to serve and protect creditors in Compulsory Liquidations, complaints of excessive liquidator fees are common.

Another potential conflict of interest stems from the fact that to get the job, the liquidator must first cosy up to the company’s director.

Official Receiver examinations are very serious and you will need expert assistance and support. I&L prepares, guides, and advises directors how to protect themselves against adverse proceedings, and helps creditors gain greater control in liquidations. Call 020 7504 1300 now for free and confidential advice… 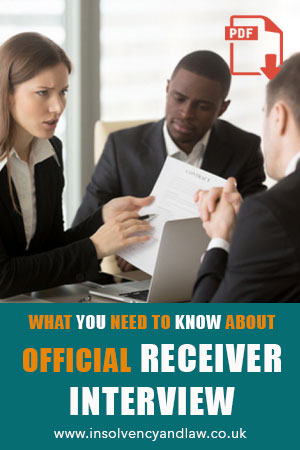 Download this free eBook to learn more about Official Receiver Interviews. All you need to know is right here, right now.